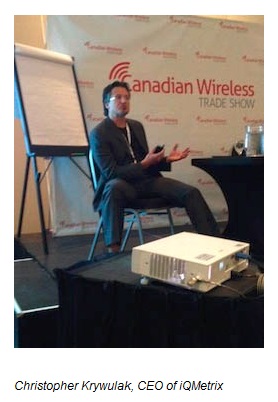 Along with the exhibitor floor, the Canadian Wireless Trade Show served as host to a stream of seminars that took place in three rooms, each hour throughout the two days of the show. I sat in on two particularly interesting ones from iQMetrix and Google that point to the changing mobile shopper, and the potential future for the bricks and mortar retailer.

Indeed, this is the very mandate of iQMetrix’s business, which focuses on sophisticated touch-screen systems and software that make it easier for salespersons to interact with customers in store, Rather than just converse, they’re able to flip through virtual pages of product information, compare products the shopper might be interested in, and even see reviews. Essentially, these are all the same benefits customers enjoy online, just with the help of a real salesperson to walk him through the process, and the ability to touch and feel the product. And, in some cases, the interactivity also allows for customers to remain engaged in the store by flipping through options on the touch screen until a real salesperson is available to serve him.

Concepts like this also allow retailers to bring that idea of limitless inventory to the bricks and mortar store. While the store might not carry that particular smartphone case in purple with blue flowers, the customer might be able to order this specific variation through the store’s own e-commerce Website (or perhaps even a mirrored Website supplied by a distributor) and have it delivered in a day or two.

This sounds almost counter-intuitive to the in-store experience, where customers have typically looked for instant gratification. But the instant gratification may come out of being able to talk to someone in person about said case, touch and feel it (albeit not in the colour you want), and understand its benefits by actually putting it on your phone. Waiting 1-2 days to get the product isn’t typical after visiting a physical store. But times are changing. And if customers are happy to wait a short period after purchasing via Amazon or eBay or Newegg, what’s to say they won’t be satisfied with this in person, too? Price matters as well, but perhaps not as much as we may fear. ​“People have to be price-conscious,” said Christopher Krywulak, CEO of iQMetrix during his seminar on Day One of the show entitled ​“Rethink Retail: Connecting With Today’s Mobile Consumer. ​“But they don’t have to have the cheapest.” This means they may be willing to pay the extra $2 or $3 just to get it ordered then and there versus heading home, booting up the computer, and completing the purchase elsewhere. From personal experience, there are a number of items I would have easily purchased from a reputable store location versus online if they carried it in inventory, or if I knew that if I went to the store, the salesperson could call it up online and set up the purchase for me.

“Showrooming is happening, but it’s not having the effect people think it is,” said Krywulak. He cites a study that notes only 17% of those accessing their smartphones via in-store Wi-Fi networks while shopping are doing so to find the desired item at another location. The majority (62%) are comparing prices, 58% are accessing product reviews, 37% are browsing that store’s Website, and 20% are looking for other colours/​options.

Google’s Richard Trinder, Head of the Telco Industry, noted in his seminar the following day, entitled ​“Today’s Wireless Shopper,” that a retailer’s brand is its Website. If you don’t have one, he said, in this day and age, it means to the consumer that your store is closed.

But the Website, or Web presence via social media channels, doesn’t just have to be about e-commerce. It’s also about getting customer’s interested in your brand, talking about your brand (in a positive way), and sharing two-way conversations with them. In essence, the end goal is to use the Web to get people interested in what you do and sell, and hopefully into your stores to buy.

Trinder uses the popular example of the Dove Real Beauty video campaign that showcased an artist first drawing a woman based solely on the description given by someone she just met, and then another sketch based on how she described herself. The emotions once the women saw the discrepancies between the two final images tugged on many a heartstring. ​“Get people talking about your brand,” he reinforces, ​“but with passion and emotion. And imagine the sales that could translate to.”

It’s also about harnessing the Web to get real-time insight, and being quick to react to that, almost even before a trend occurs. Trinder provides the example of the gluten-free craze. Before it really hit, General Mills noticed a marked increase in the number of searches for gluten-free products, and immediately used that insight to make the decision to start developing and marketing a line of gluten-free foods. To this day, General Mills remains the leader in that area of the market.

There are also a plethora of mobile apps coming to market that bring this 21st century idea of the mobile shopper into the physical store. Checkout51 credits you back monies based on specific purchases made at any retailer; while Strum gives retailers the ability to provide rewards to shoppers based on loyal shoppers, or those in the local area. Shopkicks has been taking off stateside, and Krywulak says it’ll be in Canada soon, initially via Target stores. With this app, shoppers get instant rewards through accumulated points called ​“kicks.” Imagine walking into Starbucks and grabbing a free latte through your ​“kicks,” or instantly getting a discount on the purse you’re eyeing to pick up. This could easily turn a ​“maybe” purchase into an impulse ​“yes” buy.

Apple’s iBeacon technology in iOS 7 could also be a game-changer, Krywaluk predicts, bringing low-energy Bluetooth into the mix as a great way for permission-based marketing.

We could take it even further. One of the biggest qualms about shopping in bricks and mortar retail stores is the dreaded lineup. Krywulak showed a video of a grocery store that implemented an infrared camera that uses heat sensitivity to log when a person walks into the store. Based on the average amount of time a customer usually shops, the store staff can calculate when several people may be ready to pay and ensure that enough people are manning cash registers during these rush periods. According to the store’s general manager, the technology has reduced the average customer wait times from two minutes to about 25 seconds. The difference is remarkable.

“The check out lane as we know it is gone,” says Krywulak, who adds that, of the many players looking to automate, speed up, and enhance the in-store experience, ​“whoever makes it easiest is going to have a leg up.”

The important thing to note for retailers is that they must explore these different avenues, insights, and technologies to help enhance the customer experience. Ignoring them won’t do any good, whether you sell mobile phones, AV equipment, or groceries. Shoppers are no longer going to visit your store because of the products. They can get those anywhere. They need value to be added to the experience, and mobility added to the equation in a way that makes sense for them.

“Mobile is the single most pervasive technology ever,” says Trinder. ​“More people have phones than do toothbrushes, or clean drinking water.”

You might not sell mobile phones or accessories in your store. But you can use the popularity of them to make your store a place the many customers who own them want to visit. Give them something worthwhile so that when they’re walking your aisles, face glued to the 4-inch screen, they’re getting something out of it that will keep them in there, and, more important, coming back.