(Below is an excerpt from the original article.)

There’s a new startup based out of Toronto called Slyce, and it has created software that essentially turns people into walking, talking, breathing shoppable ads for the brands they wear. It allows someone to snap a smartphone photograph of, say, a parka jacket on their friend’s or a stranger’s back and be redirected to a retailer’s site so they may purchase it on the spot.

We’re moving toward a world of shoppable anything, where inspiration can happen anywhere and the check-out counter no longer claims the majority of impulse purchases. However, before making that giant leap, marketers are testing surfaces of all shapes and sizes, from walls to magazines to screens, by incorporating e-commerce and changing the face of retail. Strategy examined some things to come. Check back tomorrow for the future of shopping through videos and movies.

Being able to scan and purchase on the go is nary a novel concept, with Tesco jump-starting the trend in 2011 with its pop-up virtual wall in South Korea. This was followed with more shoppable surfaces by equally zealous brands such as Glamour magazine and eBay in New York, P&G in the Czech Republic and closer to home, Well.ca, Jean Coutu and Walmart and Mattel in Canada.

But the next iteration of the shoppable virtual wall or window, as predicted by Dustin Rideout, VP at Sid Lee (who, in a previous life, worked in e-commerce at Amazon’s AidBooks and Research in Motion), will likely not be one that sits outside of a retailer’s store, for example in transit shelters and subways, as it has for the past few years. Not everyone wants to be interrupted with a browsing experience while commuting (especially if they value their privacy and shop on their phones), he says, adding shoppable walls will likely move closer to the retail environment, and become an accompaniment for products inside a store. 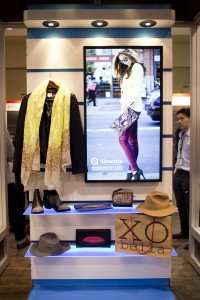 In Canada, this is becoming a reality with companies like iQmetrix (pictured left) in Vancouver launching virtual shelving and storefronts that couple screens with products on a physical shelf. Using the touch screens, shoppers can browse various items not stocked in store, compare prices and features, as well as make a purchase. ​“It’s a bridge between bricks and clicks, merging that line [between digital and physical] once people are inside the bricks-and-mortar,” adds Rideout.