Walk by any Apple store and you’ll see right away that the company is doing something right. The places are always full of people, trying out new devices, buying the stuff they like and in many cases, just hanging out.

According to a 2010 survey of vendors, distributors and other members of the RetailWire service, Apple ranked number-one in terms of delivering a superior shopping experience. 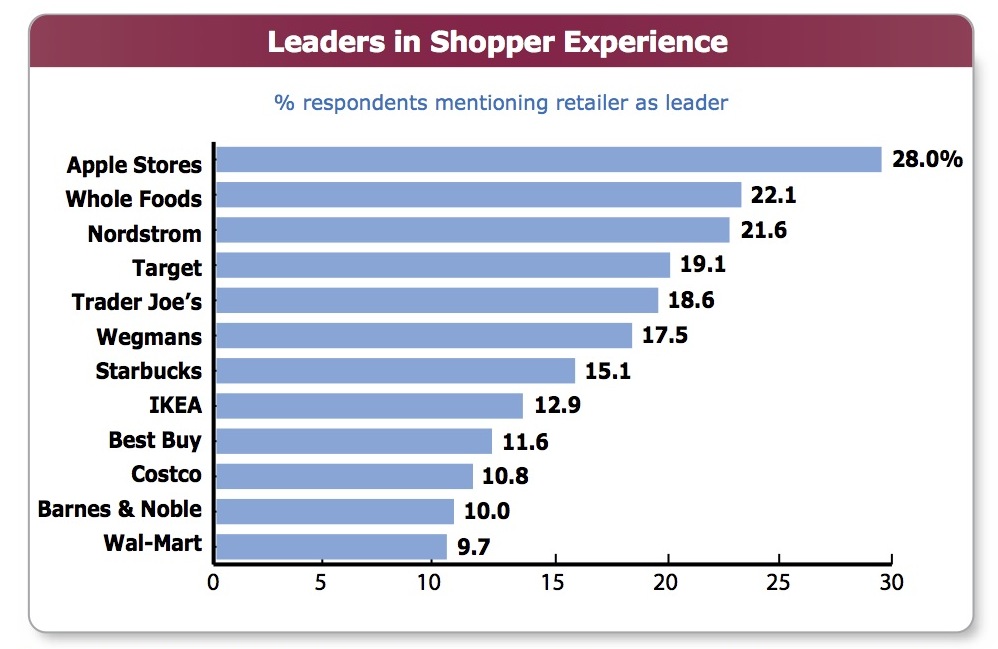 “Apple Stores was the clear leader in shopper experience with mentions by 28% of the respondents,” the survey read. ​“This is not surprising since Apple Stores offers an engaging experience with unique products and a very experiential shopping environment.”

How did Apple stores become so successful?

Josh Lowensohn asked the same question in a recent CNET.com article (May 19), in which he gives a brief history of the Apple store concept.

In the late ​’90s, Apple realized that selling its products (at the time, its main product was still computers) in big box stores wasn’t working, Lowensohn wrote. The company promptly began pulling out of Best Buy, Circuit City and Sears, focusing rather on a ​“store within a store” concept it had with CompUSA. This created a separate section for Apple, apart from PCs and other vendors’ devices. Places like Fry’s and Best Buy still have these sections.

Apple needed its own space.

“In 1999, Apple hired Allen Moyer, a former Sony executive who had been part of the company’s retail development projects, including the Metreon complex in downtown San Francisco,” Lowensohn writes. ​“There, Sony had opened its own Sony Style store where consumers could wander in and get their hands on Sony’s gadgets. Being in the middle of a densely populated and tourist-filled city, the store had the potential for big foot traffic. More importantly, it could be an attraction.”

The store is an attraction.

“The interior design of the modern Apple retail store varies by location,” Lowensohn writes. ​“Some include movie theaters with podiums for training sessions, product promotion, and special events. Others include special areas for children to play games and use educational software. However one of the most iconic fixtures is the Genius Bar, a place where users can come get their Apple hardware and software problems fixed by company-certified repair technicians. It takes customer relationships one step beyond what Apple originally intended with the unrealized cyber cafe concept by supporting those who have already bought into the company’s product ecosystem.”

“One of the areas where the advantages having your own retail stores can be seen is when it comes to launch a new product,” Lowensohn writes. ​“Apple frequently updates its hardware, with some launches garnering more public attention than others. While modest lines can form for new laptops or iPods, nothing’s had quite the effect of the iPhone and now iPad.”

“Apple’s efforts have not gone unnoticed by competitors,” Lowensohn adds. ​“Microsoft hired Wal-Mart veteran David Porter to captain the creation of its own line of retail stores in 2009. Similarities to Apple’s efforts were made almost immediately. Just like Apple, the insides of Microsoft’s retail stores have broad tables with a number of gadgets that fall into the company’s ecosystem, as well as its own software and hardware. Microsoft also staffs its own employees to talk to customers to find out their computing needs and handle support issues in a designated section of the store staffed by what early store plans referred to as ​‘gurus.’ ”