On the Wednesday following the 2010 Wireless Summit, a group of us made a trip to the Scottsdale Fashion Square Mall. Fashion Square is interesting for a couple of reasons. It’s actually the largest mall in Arizona and the American Southwest. Here’s some of what Wikipedia has to say about it:

“Scottsdale Fashion Square (has) approximately 2 million square feet (180,000 m²) of retail space, and is among the top 30 largest malls in the country. It is one of the top 10 most profitable malls in the country with over $740 sales per square foot, more than $400 over the national average. The mall is located on the northwest corner of Scottsdale Road and Camelback Road in Scottsdale, Arizona and has been owned by Westcor, a subsidiary of Macerich, since 2002. With the explosion of new retail developments and dining options in the nearby vicinity, the term Scottsdale Fashion Square has become more generalized in recent years to include the retail shopping districts adjacent to the complex, including the Scottsdale Waterfront and Southbridge.”

Our first stop was at the Sony Style store. The Google TVs were interesting, but this O’Reilly book on Android apps was less than inspiring: 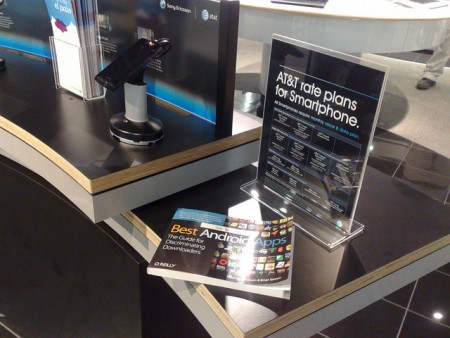 Across the way at Brookstone, this micro display Cinemin Swivel projector was more promising: 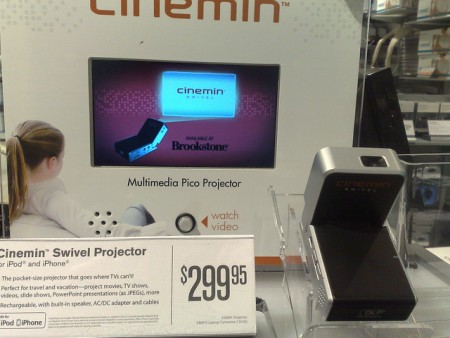 But where we ended up spending the bulk of our time was at the Microsoft retail store, which is experimenting with a lot of the different digital signage and interactive retail components that we’re investigating as well. First, this store employee playing a game using the new Microsoft Kinect really drew our eye to the store and made us want to go in and look at what was happening: 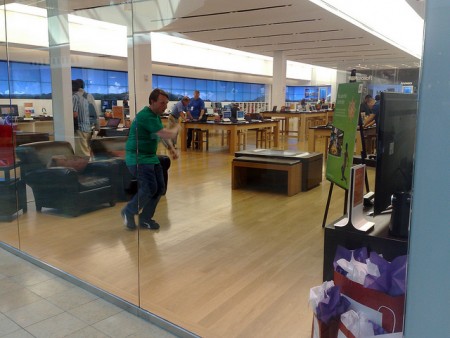 We were excited to see many different Microsoft Surface devices throughout the store. Here, three customers are playing a multi-player game. Games are definitely something that keep customers coming back and keep them spending time in the store. 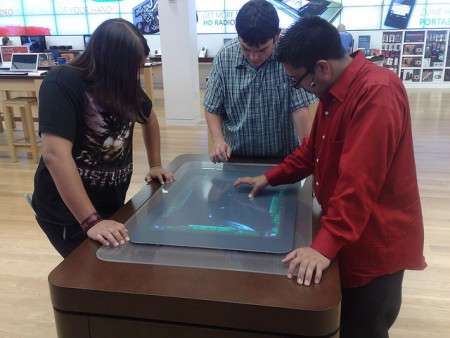 Probably the most stunning aspect of the store is the wrap around video screens on all three walls of the store. There are dozens of screens being powered by seven computers, pumping out tons of video every second, to display a variety of themes and promos. Even more interesting was the way that a set of Xbox360 units displayed demos embedded in these video walls, actually spanning four separate screens. 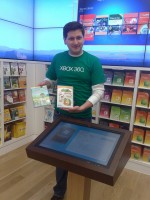 Lastly, here is a picture of Talon Morris, the Community Development Lead for the Scottsdale area. The kiosk he is standing next to allows visitors to browse tens of thousands of Windows-compatible software programs. Customers browse through the listings, select what they want to purchase, and then a DVD is burned as they wait in the back of the store, along with freshly printed case inserts.

Talon gave us a great tour of the store, explaining how everything worked, and even let us play with the giant 103″ touchscreen they have at the back of the store. He also told us that a new Microsoft retail store is opening up in Bellevue, WA. Since this is only a couple-of-hours drive from the Vancouver office, we’re definitely going on a road trip to see the new launch there as well.

We’ve uploaded more pictures of our expedition on Flickr. Have you got pictures to share of interesting interactive retail, digital signage, or Microsoft Surface in live retail environments? There are groups on Flickr for all of them: