Black Friday is less than two weeks away and the forecast is, well, muddled. If you take a look for sources, one can find reports that spending on Black Friday in 2015 both increased and also reports that it decreased over the year prior.Make no mistake though, all indications point to exactly what has come to be expected from the day after Thanksgiving. Holiday shopping will start with droves of customers crowding towards the deals.

Now, whether this busy day will put a retailer ​“In the black” for the fiscal year or not, it has been an instrumental day on the calendar every day since at least the 80s, and kicks off the most important season in the retailer’s cycle. Important as it is though, the data is pointing towards some slight changes around the edges of the day. That is, Thanksgiving Day and Cyber Monday are starting to add more and more thunder to the storm of the weekend. 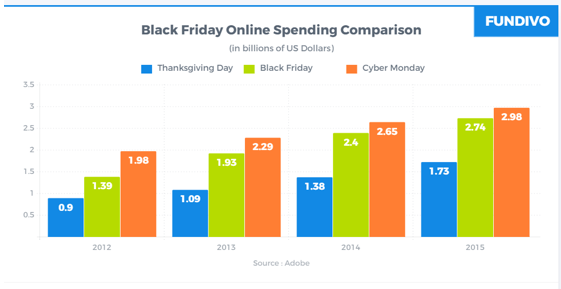 Make no mistake though – Black Friday is going to remain a perennial contender for the busiest day of the year for consumer spending. Though the whole 4-day weekend is a shopping extravaganza, last year 40% of the total weekend shoppers showed up on the actual Friday, and that portion has increased over the 4 years past. According to NRF, 73% of shoppers — 75 million people — were in stores on Black Friday, the exact same percent for the amount who shopped online on Black Friday, resulting in the biggest shopping day of the weekend.

The role of Thanksgiving and Cyber Monday

It is a weekend plus event though, with the Friday being the obvious jewel of the event. Shopping on Thanksgiving Day has steadily increased in proportion to total shopping. Cyber Monday is continuing to break year old records as well.

There is the portion of shoppers who take to their devices to do their shopping instead of going directly to the store. E-commerce sales jumped 9% on Thanksgiving Day to reach $1.1. billion and 10% on Black Friday to $1.7 billion according to ComScore. Though 59% of Americans planned to shop on the weekend, that was actually down from 2014 stats that said 61.1% would go to stores.

So the shoppers are still chomping at the bit, ready to shop, but there might be indications that they are diversifying in their attack plan. This year we might see people taking a little bit of time away from their big meal to browse and maybe buy on the Thursday. Last year showed a 25% jump over 2014 in online spending on Thanksgiving.

Or maybe the plan is to wait until Cyber Monday – which saw a 14% increase in online spending last year over 2014. The behaviors are not necessarily changing dramatically year over year but the increases are appearing across the board, whether you are measuring by day of the weekend, or the channel used to purchase.

The only certainty is that retailers need to be ready. From having sufficient inventory available ready to get to having all their sales channels firing on all cylinders, readiness is key. The consumers are going to purchase and purchase a lot – from one business or another, they are going to buy.