I came across an interesting article from L2 the other day (May 1), which made a bold claim: ​“Macy’s will be the most successful retailer of the next five years, not Amazon,” wrote L2​’s Scott Galloway.

It may seem counterintuitive, but Galloway is speaking from a profitability and order-fulfillment standpoint -- omnichannel, if you will -- and when you consider physical stores as endpoints (or delivery locations), department stores like Macy’s and Nordstrom (whose mobile app is pictured above) have a leg up on Amazon and other pure play online retailers.

Last year, Amazon spent $6.6B on delivery and received $3.1B in shipping fees.

“The Achilles heel of Amazon and other pure play online players is solving for the last mile,” Galloway wrote. ​“Last year, Amazon spent $6.6 billion on delivery and received $3.1 billion in shipping fees. For consumers as well, high delivery speeds and low-cost shipping options are often outweighed by the burden of being at home to receive packages. Meanwhile retail chains are using their physical stores as flexible warehouses for efficient online fulfillment, catering to consumers for whom omnichannel is a given.” 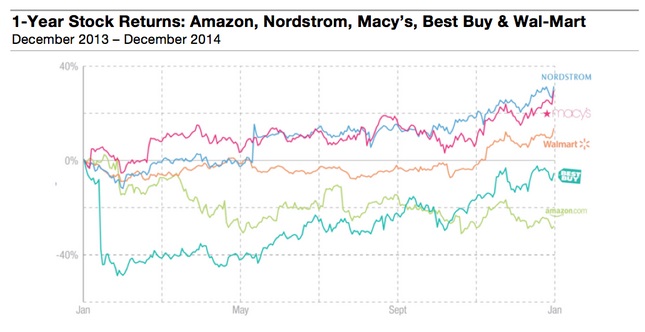 Amazon’s profitability has been called into question for years because underselling the competition, while taking a hit on shipping for Amazon Prime users, for example, doesn’t leave much cream on the top. The company has been basically breaking even for years.

Amazon has been testing out physical stores, but Macy’s/​Nordstrom are coming at omnichannel from the other direction.

“Macy’s has funneled an estimated $2 billion over the last five years into tech and e-commerce investments. This big bet on digital is paying off: Macy’s outpaced Amazon in shareholder returns by a healthy distance in 2014, as did Nordstrom. Macy’s outdid Amazon over the five-year period between 2010 to 2014 as well.” (See above graph.)